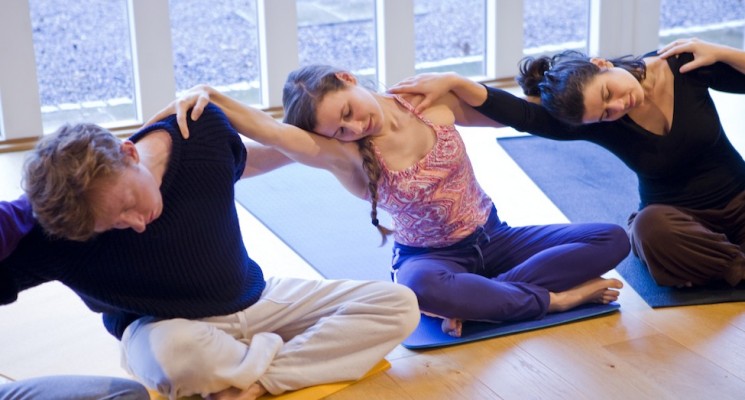 Being a woman now: If you are a woman and have a menstrual cycle then trying to force yourself to fit into the manufactured schedule of constant productivity which is set out for us in the modern world proposes a huge obstacle to health.
Trying to fit to the one-size-fits-all schedules that we’re offered will inevitably create tensions that build into physical, emotional, spiritual and psychological wounds.
From my experience as a woman and from listening to many other women’s stories, I hear that menstrual “complaints” are often accepted as the norm and that women should “learn to suffer silently”. I am adamant that these menstrual “complaints” are in fact signals from our bodies to shift to a healthier way of living and signals from nature for our species to change in the way we cohabit this earth.
The modern mind holds the “life-death-life cycle” in two separate and opposing parts.
1st: Life – the good, the prosperous, the natural and productive.
2nd: Death – the evil, the grotesque, the wasteful and the unproductive.
Religion’s separation of heaven and hell has a lot to account for in this warped view that we now collectively uphold. This death-negative assumption is often unspoken, yet its clarity resides everywhere in modern life and governs most of the choices we make in how we live. It affects the health and wellbeing of ourselves as well as that of the whole planet and all of its beings.

References: Women Who Run With The Wolves: Contacting the Power of the Wild Woman by Clarissa Pinkola Estes, Blood Relations: Menstruation and the Origins of Culture by Chris Knight.

I rarely hear yoga teachers name the uterus or womb and its neighbours (the vagina, ovaries and cervix) in classes. Yet women with these organs account for 90% or more of those people in most yoga classes. It seems that culturally, we just don’t rate the importance of these parts unless they are carrying out a reproductive function. This is something which I find odd as most women are really keen to know more about menstruation when an opportunity is presented. Culturally, we also believe this area is innately problematic and expect it to need medical intervention. The natural body function of labour has become increasingly medicalised and passive, as if the female body is not designed to labour without scientific aid and assistance. Yoga was traditionally male-focused and neglected women in its documentation. But it is now filling the uterine hole in its science, firmly supported by Ayurveda and the millions of female practitioners around the world exploring yoga from a feminine perspective. Here are a few things you may not have known about the uterus:

These scientific understandings of the uterus validate its importance and the holistic nature of the human body, showing once again how everything is interconnected and interdependent. To look after the health of the uterus, we firstly need to give it some attention. To help this shift, teachers can name and bring awareness to the uterus in yoga classes and workshops. We can send our internal focus to our womb in our home practice and discuss its role and power amongst female and male friends or partners.

Here’s ten simple steps you can take to balance out your biochemical communication and improve your uterine health:

If you’re interested in researching uterine health beyond this article, my main resources are these five amazing books:

1) Women’s bodies Women’s wisdom by Christiane Northrup, 2)The Uterine Health Companion by Eve Agee, 3)Blood, Bread, and Roses: How Menstruation Created the World by Judy Grahn and Charlene Spretnak, 4)Blood Relations: Menstruation and the Origins of Culture by Chris Knight, 5)The Woman’s Quest by Alexandra Pope and Sjanie Hugo.

I would like to thank these authors for their profound contributions to modern science, philosophy, spirituality and women’s health.

I’m regularly aware of the possibility that the yoga practice could become yet another fascist reinforcing method for perfection with disregard for the natural beauty of that which is.
Our practice could teach us to love and accept ourselves, but often we accidentally fall into a practice on and off the mat that beats and whips our fat, ugly, stiff, not-good-enough bodies into the model shape we need to be of value to ourselves and to society.
I did a yoga photo shoot last week and it brought up so much emotion, conflict and thought for me on this topic.

26-year-old, 8.4 stone, healthy, athletic, beautiful young woman. And the night before the shoot I nearly cancelled in fear that I was not thin, worthy, able, good, beautiful, or skilled enough to do it. Without the support of my partner Gabriel and my own compulsion to face anything that scares me, I would not have managed to keep it together and show up.
That night, my mind threw up a whole catalogue of fears:
What do I wear, I’m not fashionable enough, which posture should I do, I’m not strong enough, I’m not flexible enough, how should I do my hair, should I shave my wild underarms, should I eat breakfast, will I be perfect enough, will Yoga GPS like it, use it, why am I even a part of this, they’ve asked the wrong person, I’m an impostor?
All these fears boiled down to = my lack of self-value.

My own inner critic that is not yet fully integrated as an ally is still the destroyer in my life. This is a deep, old inner story “that I am not enough, that I am not welcome, that I am lacking”. This is a personal story and it is a wide cultural disease. We are sold this global story constantly so as to create the need for consumption. It is the most damaging limb of the modern mind. And it is a bugger to re-write. Our yoga practice should provide a nurturing space to help us re-write this, not reinforce it. But when we are surrounded by hot, sexy yoga and constant images of the perfect photo-shopped yoga posture, how can we not bully ourselves to be something better?

I long for a yoga idol that is as integrally-flawed as we all are. Someone who is bare and courageous enough to own their imperfections as a mark of wholeness and union. I hope if one appears, I can accept them as wonderful and not reject their authenticity as failure. I hope that I can be this for myself and for all my relations too. And I intend to create a practice for myself and for those students of yoga who come to me that is about whole acceptance and integration of the self.

My baby step towards this aim is that this week, in all my classes and my own self practices, I am going to bring awareness to the pleasure of being in a human body, and the bliss of movement and breath. The simple joy of exploring different physical shapes and a huge serving of gratitude for the beautiful gift of the body I have and that every human has.